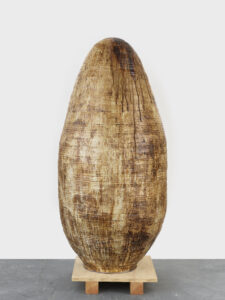 New York, NY (March 24, 2022) – Friedman Benda is pleased to present Los Angeles-based artist Adam Silverman’s third solo show with the gallery entitled Marks and Markers. The title of the show refers to not only the marks from Silverman’s process (the artist’s hands, the fire, the glaze and the compounding alchemy), but also referencing the “markers” that denote certain ceremonies, rituals, the passing of time and boundaries, or a signpost marking one’s physical and existential position. Tracing the evolution of Silverman’s career through two discrete bodies of work, this self-reflective exhibition refers back to the genesis of his ceramics practice while looking ambitiously to the future.

The culmination of a three-year long investigation, Marks and Markers premieres a series of large-scale sculptures up to 6 feet in height that challenge the physical limits of the material. Driven to communicate through form, scale and posture, Silverman was forced to come full circle in order to grapple with new processes, materials and through rigorous experimentation. To counteract the unpredictable alchemical process of working at this scale, he returned to more pure geometrical, closed silhouettes pervasive in his work before he slowly progressed into increasingly looser, improvisational forms that have come to define his approach. Drawing on his architectural background, Silverman relies on sketching the large forms in full-scale charcoal drawings that inspire and reflect the energy captured in the clay. Akin to construction drawings, he uses these as guides in the making of the ceramic works.  The installation will include these wall-hanging scrolls—bringing the studio process into the gallery space and offering the viewer a glimpse of each piece’s trajectory.

Standing 1 to 3 feet in height, the second body of work presented will be more intimately scaled with each pushed to the point of failure while maintaining a glimpse of their original geometric purity. An interplay of arrested motion, contour, and space, these pots are an expression of their own making. Since he first began working with local materials in Mashiko Japan in 2006, Silverman has delved deeper into employing these raw materials in his practice as much for their cultural significance as their physical potential. Silverman has continued to pursue this direction by conceiving of bodies of work comprised of and in response to the specific locations of LACMA and the Kimbell Art Museum in Fort Worth, and his acclaimed Common Ground project, in which he brings together clay, water, and wood ash from each of the 56 states and territories of the US. For nearly a decade Silverman has pursued this direction in his practice while spending each summer working in rural, coastal Rhode Island. Marking a culmination of this investigation, a grouping highlighted in the show employ and explore materials from the Pacific and Atlantic oceans. Silverman combines beach clays, driftwood ash, seaweed and salt in celebration and acknowledgement of their biochemical beauty.

About Adam Silverman
Silverman was born in 1963 in New York, NY and received a Bachelor of Fine Art and a Bachelor of Architecture from the Rhode Island School of Design in 1987 and 1988. He served as a partner and Los Angeles studio director of Heath Ceramics for five years between 2009 and 2014.  Between 2008 and 2010 he collaborated with architect Nader Tehrani and created Boolean Valley, an installation comprised of 400 clay objects with site specific response versions installed at MOCA Pacific Design Center, Los Angeles, CA, Montalvo Arts Center, Saratoga, CA, Nasher Sculpture Center, Dallas, TX, and San Jose Museum of Art, San Jose, CA.

From 2010 to 2012, Silverman worked on a reverse archaeology project at the Kimbell Museum in Fort Worth, Texas, putting Renzo Piano in direct dialogue with Louis Kahn and Tadao Ando—Silverman made a series of pots made entirely from the materials brought together from the construction of each of the architects’ designed buildings. In 2019, LACMA commissioned Silverman to create a body of work using materials from the construction site of their new Peter Zumthor designed building. The project will celebrate the specific site where LACMA resides from the prehistoric geology excavated from 40 feet down in the construction pit highlighting the cultural significance of the institution and the museum’s encyclopedic collection.

In late 2019, the artist started Common Ground, an ongoing project in which he brings together clay, water, and wood ash from each of the 56 states and territories of the US. By mixing these materials together, he sought to erase the arbitrary borders of statehood to create a single new material. Common Ground reflects on the divisiveness of the current state of the country, while also celebrating the commonality and universality of the shared American experience. On March 20, 2022, a collaborative exhibition between Silverman and the Sogetsu Ikebana School will open at The Japanese American Cultural and Community Center (JACCC) in Los Angeles. The exhibition will debut Silverman’s 56 Common Ground pots, each with individual ikebana arrangement made by one of 56 of the Sogetsu instructors and advanced students.

About Friedman Benda
Friedman Benda identifies and advances key narratives in postwar and contemporary design with a commitment to a critical view of design history. We aim to expand the dialogue in the field from its established sources, exploring perspectives that have previously been marginalized. Spanning five continents and four generations, Friedman Benda represents a roster of seminal established and emerging designers, as well as historically significant estates. Since 2007, the gallery’s exhibitions, publications and collaborations with institutions have played a vital role in the development of the contemporary design market and scholarship. Dedicated to archiving the pioneering voices in our field, the gallery hosts Design in Dialogue, a weekly series of online interviews with leading architects, designers, curators, and critics. For further information please visit www.friedmanbenda.com and the gallery’s  Instagram @friedman_benda and YouTube channel.