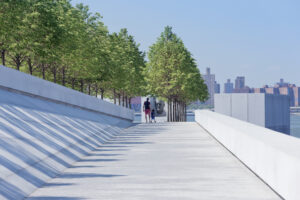 New York, NY September 2, 2022 – The Four Freedoms Park Conservancy (FFPC), the nonprofit organization that programs the Franklin D. Roosevelt Four Freedoms State Park on Roosevelt Island, New York City, is pleased to announce Voices of Freedom, a sound installation at the park from September 14th through October 30, 2022. The installation was produced in collaboration with the Institute of International Education’s Scholar Rescue Fund (IIE-SRF), a New York-based global program that assists academics fleeing conflict or targeted persecution. The installation represents the first time that a presidential memorial has served as a platform to empower asylum seekers and other displaced individuals to share their lived experiences in response to the Four Freedoms: freedom of speech, freedom of religion, freedom from want, and freedom from fear. On select weekends, park visitors will have the opportunity to record their own interpretations of the Four Freedoms to be incorporated into an ongoing oral history project.

According to Howard Axel, CEO of FFPC, “Four Freedoms Park Conservancy was founded to realize Louis Kahn’s 1973 design for a memorial to President Franklin Roosevelt. Kahn’s hope for the park was that it would be a public space for ‘inspired use.’ This is the call-to-action FFPC responds to today. With Voices of Freedom, an audio project produced with IIE’s Scholar Rescue Fund, FFPC amplifies the voices of people most often left silent at our monuments and public spaces. I am grateful to the scholars who have lent their personal narratives to this important effort.”

Voices of Freedom is a found experience that presents a 15-minute audio program that opens with newly remastered selections of Roosevelt’s January 6, 1941 “Four Freedoms” speech. Actor and activist Michelle Hurd (Star Trek: Picard, National Board Member of SAG-AFTRA) lends her voice to the project, as she introduces the testimonials of scholars displaced from their homelands through war and individual persecution.

“I was thrilled to lend my voice to this project during this historic moment. As a woman of color in the entertainment business, both in my roles as an actor on set and as a union leader in the boardroom, I am always fighting for equal treatment, inclusion, and fairness for all, and celebrating the freedom to give voice to this fight,” explains Hurd.

Included in the program are Dr. Amna Afreen, a Pakistani scholar of Islamic studies who fled after surviving an attack that took the life of her mentor, the reformist Muslim scholar Muhammad Shakil Auj. Another is a Venezuelan economist who is unable to identify herself to ensure the safety of her loved ones. Dr. Omar Sadr, from Afghanistan, was a political scientist and public intellectual in Kabul until he escaped the resurgent Taliban last year. All three professors were brought to the U.S. and connected to American universities through IIE’s Scholar Rescue Fund.

“For generations, Afghanistan’s citizens have borne the brunt of the ideological argument over freedom and human rights,” Dr. Sadr explains. “Currently, the totalitarian regime of the Taliban is depriving millions of their fundamental rights. Voices of Freedom is an opportunity to organize international solidarity to support the struggle of the people of Afghanistan for rights and ‘Four Freedoms.’”

The recordings will echo through the park, creating a space for visitors to learn from the experiences of the scholars and contemplate the roles the Four Freedoms play in their own lives. Additional voices from displaced scholars supported by IIE-SRF will be incorporated into Voices of Freedom throughout its run.

“We are deeply honored to partner with FFPC on Voices of Freedom,” says IIE CEO Dr. Allan Goodman. “This powerful installation speaks directly to the Scholar Rescue Fund’s mission to preserve the lives, voices, and ideas of the many brave academics across the globe who refuse to be silenced by war or repression. U.S. higher education institutions have always played an outsized role in welcoming these scholars and supporting their dreams to achieve the Four Freedoms.”

On select weekends, park visitors will have the ability to record their own reflections on the Four Freedoms and how these principles are fundamental to their own lives. Voices of Freedom will continue as an audio archive well after the on-site installation is over. FFPC hopes to enable future users of the Voices of Freedom archive to hear how understanding of the Four Freedoms has evolved over time in response to social, political and economic changes.

Voices of Freedom is the latest installation presented by Four Freedoms Park Conservancy. In 2021, artist Shaun Leonardo was commissioned to create a public artwork entitled Between Four Freedoms. In 2019 FFPC partnered with the New York Historical Society and the League of Women to create a vast field of sunflowers in celebration of the 100-year anniversary of the ratification of the 19th Amendment. Also, in 2019 and 2022, public programs that included partners as diverse as Video Out and Ballet Hispánico transformed the 120 foot long Grand Stairs into the city’s largest pride flag.

According to New York State Parks Commissioner Erik Kulleseid, “This new attraction from the Four Freedoms Park Conservancy highlights the innovation and education they bring to our park. Every day we have visitors with unique voices and thoughts and this partnership celebrates these freedoms and makes us all feel included. It’s a great reminder to hear President Roosevelt’s speech again.”

About The Institute of International Education – Scholar Rescue Fund
The Institute of International Education’s Scholar Rescue Fund (IIE-SRF) is the only global program that arranges, funds, and supports fellowships for threatened and displaced scholars at partnering higher education institutions worldwide. Founded in 2002, it builds upon IIE’s century-long history of assisting university students and scholars under threat. Over the past 20 years, IIE-SRF has supported more than 1,000 professors, researchers, and public intellectuals from 60 countries, placing them in academic positions at over 450 host institutions in 53 countries.

About Four Freedoms Park Conservancy
Four Freedoms Park Conservancy (FFPC), founded in 2011, operates under a Friends Agreement with New York State Parks to produce and curate public programs at Franklin D. Roosevelt Four Freedoms State Park. The park, designed by the groundbreaking American modernist architect Louis Kahn, is among the greatest architectural masterpieces in New York City. By leveraging this spectacular architecture and the unique location of the park, FFPC strives to produce events, installations, commissions of public art, and partners with local organizations that, together, serve a singular purpose: igniting the conversation around the Four Freedoms and the legacy of President Franklin D. Roosevelt.

Hours of Operation
Wednesdays through Mondays 9:00 AM – 7:00 PM
Closed Tuesdays