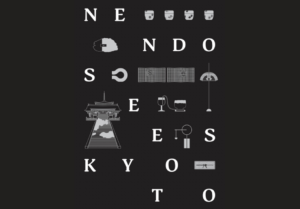 In nendo and 16th Generation master craftsman Onishi Seiwemon’s hands, the vessels for a traditional tea ceremony, traditionally cast in iron, are instead rendered with 3d printing technology. Alongside Kojima Shouten, a studio that has been making Kyoto paper lanterns since its founding in the middle of the Edo period (1603-1868 A.D.), the iconic washi paper and bamboo shade of the region has been reimagined as 10 designs. Each design is presented with two results, a juxtaposition of before and after, which sees Hyouri ’s shades seem to swallow parts of themselves, some triply nested, and some even reaching inward to peak through the other side.

Raku-ware, first produced in Kyoto in the 16th century Momoyama period by the first generation of the Raku family, is here recast not as a vessel to drink from but as a vessel that drinks. Alongside Raku Jikinyu, fifteenth in the Raku line, nendo placed their raku pieces, Junwan , on a Petri dish lined with felt to absorb beverages like red wine, coffee and various teas. Acting as organic dyes the unfired pieces absorbed the drinks’ palette, creating a finish that expressively emphasizes the medium’s texture.

For more than 250 years since the Edo period’s Horeki era (1751–1764), generations of gardeners have been designing landscapes under the name of Ogawa Jihei at Kyoto’s Onniwa Ueji. While typically a necessity for gardens to be outside, it was 12th generation Ogawa Katsuaki’s idea to bring the allure of the garden indoors. Ishidansu sees boulders, a key element of a traditional Japanese garden and the slowest-changing component, transposed into drawers, with hewn rock elements mesmerizingly morphed with wood.

Together with artisan Masaki Yano and joiner Takeshi Sakurada, Fuu-raijin , a duo of screens have been produced using Sashimono –a traditional Japanese joinery technique that assembles Hinoki (Japanese Cypress) pieces without the use of glue or joinery tools. Created in response toWind God and Thunder God , Sotatsu Tawaraya 17th century painting depicting the wind god, Fujin, stirring wind and rain and the thunder god, Raijin, beating a drum to produce rolling thunder and lightning, Fuu-raijin captures the gods’ mythos within the characteristic geometric grid of Sashimono as warped and twisted curved elements –a radically progressive material extension of this ancient methodology.

A major force in contemporary design, nendo has introduced a wholly original language of radical simplicity, poetic metaphor,and lightness of touch. Blending traditional Japanese arts and crafts, folklore and legacy with material and technological innovation, the studio’s malleability of typology, reference, material and form is encapsulated by the studio’s name: nendo being the Japanese word for clay.

Oki Sato (b. 1977) founded nendo and established their first office in Tokyo in 2002. Canadian-born Sato studied at Tokyo Gakugei Oizumi Junior High School and Waseda University Senior High School, then graduated from the Department of Architecture, School of Science and Engineering from Waseda University in 2000. Since their establishment, nendo’s prolific multidisciplinary practice has encompassed architecture, product, graphic and industrial design–collaborating with brands such as Baccarat, Tod’s, Tag Heuer, Jill Sander, Walt Disney and Coca-Cola.

For their first collaboration with the gallery,ghost stories (2009), nendo designed a dreamlike interior for forty of their acclaimed Cabbage Chairs (2009). The second collaboration, 50 Manga Chairs (2016), was first shown at a historical Romanesque basilica in Milan, then immersed in an audio-visual installation in Friedman Benda’s white box gallery in New York, and most recently as part of the NGV Triennial (2017-2018) at the National Gallery of Victoria in Australia.

nendo has been the subject of numerous international exhibitions including their retrospectiveInvisible Outlines (2017) at the CID Grand-Hornu in Belgium and recently the National Gallery of Victoria presented Escher X nendo | Between Two Worlds (2018-2019), a groundbreaking dialogue between nendo’s immersive spatial installations and the work of Dutch artist M. C. Escher.

Friedman Benda identifies and advances key narratives that intersect contemporary design, craft, architecture, fine art, and cutting-edge technological research. The gallery promotes synthesis between leading creative thinkers and makers by creating opportunities to advance new connections within the global design community. Friedman Benda is committed to a critical view of design history. We aim to expand the design dialogue from its established sources, exploring perspectives that have previously been marginalized. Spanning five continents and four generations, Friedman Benda represents a roster of seminal established and emerging designers, as well as historically significant estates. With locations in New York and Los Angeles, the gallery’s exhibitions, publications and collaborations with institutions have played a vital role in the development of the contemporary design market and scholarship since 2007. For further information please visit www.friedmanbenda.com and the gallery’s Instagram @friedman_benda and YouTube channel.

Fall Preview - Save the Date!