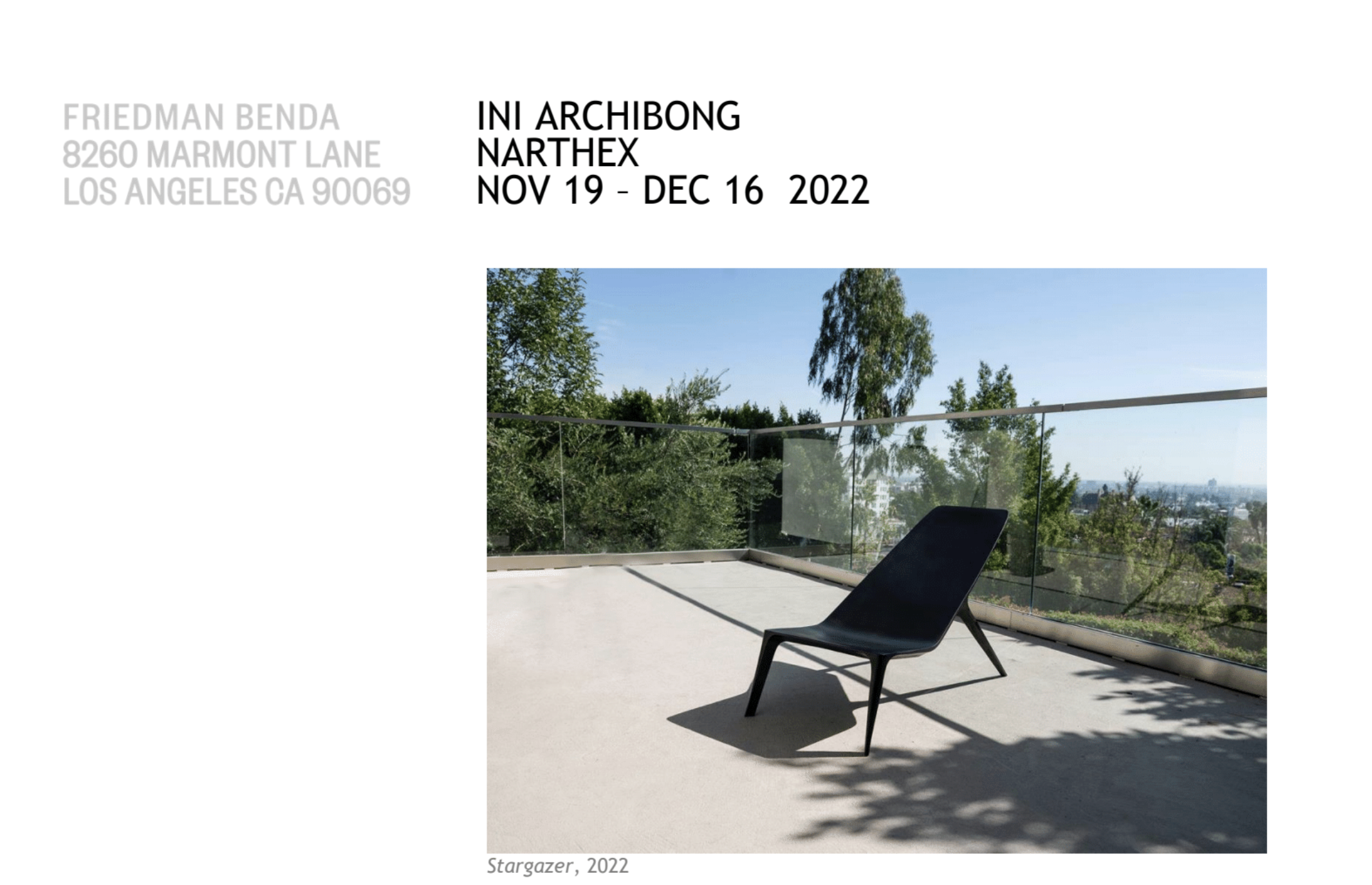 Los Angeles, CA – Friedman Benda is pleased to present Ini Archibong’s second solo exhibition with the gallery and the first time a comprehensive body of work will be on public view in his hometown of Los Angeles. Referring to his continued interest in exploring themes of spirituality and world religions through his practice and in dialogue with his Nigerian ancestry, Archibong titled his exhibition Narthex.

Through Narthex, which is defined as the enclosed entrance typical of a church or basilica, Archibong references the origins of the “porch,” as an architectural feature reappropriated from Africa by the West. “In contemporary society, the idea of being on the porch denotes existing in a space of contemplation in between the safety of the home you know and taking the risk of deciding to ‘jump off the porch’ to enter into the world and make your mark,” says Archibong. The result is each object becoming an archetype of beauty and resilience.

Highlighting his own journey as a designer, Archibong used this opportunity to revisit the works he created while a student at the Arts Center of Pasadena. “Narthex represents the threshold between the known and the unknown. It’s the space that separates the outside world to the inner world of the church. From that standpoint, the works I created for the show symbolize the time in my creative career where I was exploring how to become the designer I wanted to be,” states Archibong.

His most personal body of work to date, each work symbolizes a different facet of Archibong’s experience growing up in Pasadena. Informed by wide ranging influences such as craftsman architecture or the LA street culture of the 1990s. Serving as an entry point for further exploration, Archibong reinterprets these forms from his early career through new materials and collaborating with LA-based artisans. The exhibition debuts a reinterpretation of his Switch Table, the prototype of which was recently acquired by the Los Angeles County Museum of Art.

About Ini Archibong
Ini Archibong imparts a deeply personal and spiritual approach to design. Archibong’s practice is characterized by his dedication to craftsmanship and to the integrity of his chosen materials, as well as an unyielding passion for world cultures and his own Nigerian heritage. “Being a creator has always been a process of distilling my perception of the world around me into creations that can be understood by as many people as possible regardless of their background, point of view or position in life,” says Archibong.

Archibong was born in 1983 in Pasadena, California. Originally trained in Industrial Design, Archibong graduated with a Bachelor of Science in Environmental Design from the Art Center College of Design. Upon graduation, he moved to Singapore to work alongside Tim Kobe, who developed the Apple store concept. He then relocated to Switzerland where he received a Master of Arts in Luxury Design and Craftsmanship from L’École cantonale d’art de Lausanne (ECAL). Since establishing his own studio in 2010, Archibong has gone on to collaborate on numerous high-profile projects including with Hermès and Knoll.

His works have been exhibited at museums and public institutions worldwide and most recently in the exhibition Speechless  (2019), co-organized by the Dallas Museum of Art, TX and the High Museum of Art, Atlanta, GA, and Connected  (2020) at the Design Museum in London.

Archibong’s most ambitious project to date, the Pavilion of the African Diaspora, was installed in June 2021 as part of the London Design Biennale. Conceived as a trio of sculptural structures to be installed on the River Terrace at Somerset House then travelling to New York and Miami later this year, the Pavilion will serve as a platform for reflection on the past, present and future of the African diaspora. Archibong lives and works in Switzerland.

About Friedman Benda
Friedman Benda identifies and advances key narratives that intersect contemporary design, craft, architecture, fine art, and cutting-edge technological research. The gallery promotes synthesis between leading creative thinkers and makers by creating opportunities to advance new connections within the global design community. Friedman Benda is committed to a critical view of design history. We aim to expand the design dialogue from its established sources, exploring perspectives that have previously been marginalized. Spanning five continents and four generations, Friedman Benda represents a roster of seminal established and emerging designers, as well as historically significant estates. With locations in New York and Los Angeles, the gallery’s exhibitions, publications and collaborations with institutions have played a vital role in the development of the contemporary design market and scholarship since 2007. For further information please visit www.friedmanbenda.com and the gallery’s Instagram @friedman_benda and YouTube channel.