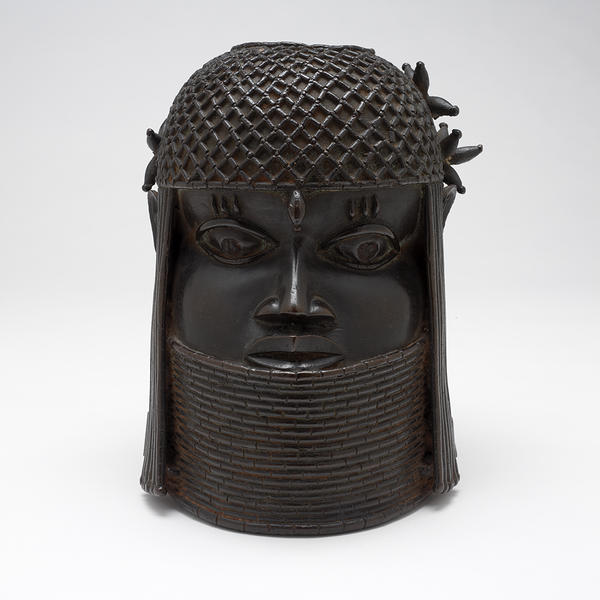 PROVIDENCE, RI (October 13, 2022) – The RISD Museum and the Rhode Island School of Design are pleased to announce the rightful return of Head of a King (Oba), previously held in the museum’s collection, to the Nigerian National Collections. The transfer occurred on October 11 at a ceremony at the Smithsonian Institution in Washington, DC in conjunction with the National Gallery of Art, the Smithsonian Institution, and the Nigerian National Commission for Museums and Monuments (NCMM).

The transfer ceremony included the return of the Head of a King (Oba), also referred to as a “Benin Bronze,” which had been in the RISD Museum collection until its deaccessioning in September of 2020, along with 29 objects returned from the Smithsonian Institution, as well as a single object returned from the National Gallery of Art. These 31 objects are among the first Benin Bronzes to be repatriated to Nigeria by American institutions that were looted during the 1897 British colonial raid of the Royal Palace of Benin.

The ceremony was held at Smithsonian’s National Museum of African Art and remarks were made by Kaywin Feldman, director of the National Gallery of Art; Lonnie G. Bunch III, secretary of the Smithsonian Institution; Ngaire Blankenberg, director of the National Museum of African Art; Alhaji Lai Mohammed, the minister of information and culture of Nigeria; and Prince Aghatise Erediauwa of the Benin Kingdom. In attendance representing the Rhode Island School of Design and the RISD Museum were RISD President Crystal Williams, Interim Museum Director Sarah Ganz Blythe, and Chief Curator and Curator of Ancient Art, Gina Borromeo. Following the ceremony, representatives signed documents officially transferring ownership of the objects to the NCMM.

After four years of working with community partners in Nigeria and the United States, as well as the Benin Dialogue Group (a group of museum colleagues around the world working towards the return of these objects), the RISD Museum is pleased to have reached this milestone. Since 2018 the RISD Museum has kept museum and college colleagues apprised of developments and spoke regularly to their Trustees, Boards, and governing bodies, who ultimately approved the deaccession. By the time the deaccession was brought to a vote in September 2020, the decision was unanimous.

Sarah Ganz Blythe, the RISD Museum’s Interim Director states, “In 1897 the Head of an Oba was stolen from the Royal Palace of Oba Ovonranwmen. The RISD Museum has worked with the Nigerian National Commission for Museums and Monuments to repatriate this sculpture to the people of Nigeria where it belongs. We are honored to join with the National Gallery of Art and Smithsonian Institution in important work, as the first US institutions to return Benin Bronzes.”

Says Alhaji Lai Mohammed, Honourable Minister of Information and Culture Nigeria, “Nigeria is immensely gratified at the commendable decision of the Smithsonian National Museum of African Art, the National Gallery of Art and the Rhode Island School of Design (Museum) to return these artefacts (sic) that left Africa over a century ago. Nigeria looks forward to working with these institutions on joint exhibitions and other educational exchanges. By returning the artefacts, these institutions are together writing new pages in history. Their brave decision to return the timeless artworks is worth emulating.”

Prof Abba Isa Tijani, Director-General, National Commission for Museums and Monuments says, “I am very delighted that these transfers to Nigeria by these eminent institutions, the Smithsonian National Museum of African Art, the National Gallery of Art and the Rhode Island School of Design (Museum) are actually taking place. This event opens a new vista regarding USA’s cultural institutions relationship with Nigeria. The event is a harbinger of greater things to come as other museums and institutions here in the US with collections of Benin Bronzes are expected to follow suit. We hope for great collaborations with these museums and institutions and we have already opened promising discussions with them concerning this. The entire world is welcome to join in this new way of doing things. A way free from rancours and misgivings. A way filled with mutual respect.”

History of the Head of a King (Oba):
In 1897, following unsuccessful attempts at annexation, British forces sacked the Benin kingdom, killing many people, burning cities, forcing the reigning king into exile, and looting works of art and other treasures from the Benin Royal Palace. Soon after, museums and individuals throughout Europe and the United States began collecting Benin bronzes, including this one.

The bronze was given to the RISD Museum by Lucy Truman Aldrich in 1939. It was acquired in a 1935 sale of objects from the Benin Kingdom from the Knoedler Gallery in New York. A sticker reading “Imported from France” and a French customs stamp on the interior suggest that it had been in a French collection. Although we have not been able to trace this head to a specific French or British collection, it was almost certainly one of the objects looted during the 1897 raid.

The bronze head is an idealized representation of an oba (king) of the Edo people of Benin, West Africa, and is an example that illustrates the technical mastery of royal Benin artists, who were introduced to lost-wax casting techniques by neighboring Yoruba artists. Metalworking remains an important tradition in this part of Africa today. Commemorative heads such as this one were commissioned by an incoming oba, or King, to honor his departed predecessor, and were placed on ancestral altars in the royal palace. The oba’s high status is indicated by his cap of coral beads and the single cowrie shell placed on the middle of his forehead. Braids and additional beaded strands frame his face. Above each of his eyes—opened wide to signify that he was all-seeing—are three scarification patterns. A tubular bead collar covers his chin and neck. An elephant tusk, carved using techniques acquired through trade with the Portuguese, once protruded from the hole on top of his head. The oba possessed political and religious authority and held sweeping powers over his subjects. The official owner of Benin lands and final adjudicator of justice, he oversaw resources and regulated trade with other African kingdoms and with European traders, including the Portuguese and Dutch. During the period in which this sculpture was made, the Benin Empire exerted a powerful presence on the west coast of Africa.

About the RISD Museum

Established in 1877 as part of a vibrant creative community, the RISD Museum stewards works of art representing diverse cultures from ancient times to the present. We interpret our collection with the focus on the maker and we deeply engage with art and artists, presenting ideas and perspectives that can be inspiring and complex. We aspire to create an accessible and inclusive environment that builds meaningful relationships across all communities. For more information: 401-454-6500 or risdmuseum.org.

BEYOND TERRITORIES: MADE. MAKE. MAKING Exhibition Wraps Up in New York Before Concluding in Hong Kong