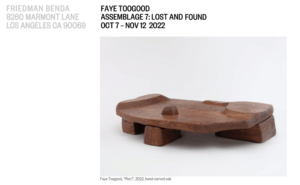 Los Angeles, CA (August 29, 2022) – Friedman Benda is pleased to present Faye Toogood’s Assemblage 7: Lost and Found, the groundbreaking designer’s third solo exhibition with the gallery. Burrowing into Britain’s material history and its important role in defining national culture, Assemblage 7 sees Toogood engage with Oak and Purbeck Marble–native materials with deep, historic roots to create final forms that allude to that which may have been hidden by time.

Oak and Purbeck Marble, tied to both objects and architecture, have formed a backbone of British material culture since the Middle Ages. Oak beams formed 16th and 17th century timber-framed housing and was adroitly manipulated into ornate wood paneling and traditional furniture. Purbeck Marble, in fact a fossilized limestone hewn from the Southern English coast, was the material of choice in churches and cathedrals (including Canterbury Cathedral) across England by 1200 A.D., its deep blue and green lustrous hue enlisted for its decorative quality.

In Toogood’s hands these materials are excavated and cast anew. Digging down to find voids and reintroduce traces of the past to the modern day, Toogood has brought these ancient materials into a fresh light. Venerating the primacy of traditional artisanal carving techniques, each work has been shaped through the immediacy of subtractive carving, their alternately rippling or sweeping surfaces suggestive of the surface of the land itself or the stratigraphy of an archaeological dig.

At once romantic yet rigorous, executed in final forms that play with positive and negative space, Toogood’s Assemblage 7 takes on a neo-Duchampian quality, with the objects akin to the objet trouvé. With a nod to archaic lodestones, cairns, and barrows, here the lost becomes found.

Accompanying this exhibition, Faye Toogood: Drawing, Material, Sculpture, Landscape will be released by Phaidon in July, 2022. The first in-depth look at the work of the globally celebrated and multidisciplinary London-based designer Faye Toogood, this publication covers all aspects of her work, from clothes and furniture, to installations and interior design. Friedman Benda will host a book signing at the opening reception of the exhibition.

About Faye Toogood
British designer Faye Toogood has emerged as one of the most prominent women in contemporary design today. “Whether you are a fashion designer, a furniture designer, or an interior designer, the materials you can get your hands on are essential,” she says.

Toogood was born in the UK in 1977 and graduated with a BA in the History of Art in 1998 from Bristol University. Upon graduation, she worked as a prop stylist at The World of Interiors before establishing Studio Toogood in 2008.

Working in a diverse range of disciplines from sculpture to furniture and fashion, Toogood often reinterprets and reinvents classical tropes and references from art history by introducing a new aesthetic. Since the conception of her immediately recognizable voluminous Roly-Poly chair (2014), she has been considered among the great form-givers of the 21st century.

Her career is marked out by the discrete Assemblages, each of which conjures a compact world of interrelated ideas, forms, and materials. Her first collaboration with the gallery, Assemblage 5, was inspired by a visit to Henri Matisse’s Chapelle du Rosaire de Vence explored ancient animist notions of the elements water, earth and moon through a personal lens. In her most recent Assemblage 6, Toogood set out to “unlearn” the process of design and build a new vocabulary for furniture by recasting sculptural maquettes made from mundane materials found in the studio.

Her works have been acquired for the permanent collections of institutions worldwide, including the Corning Museum of Glass, NY; Dallas Museum of Art, TX; Denver Museum of Art, CO; High Museum of Art, Atlanta, GA; National Gallery of Victoria, Melbourne; and Philadelphia Museum of Art, PA. Toogood lives and works in London, UK.

Friedman Benda identifies and advances key narratives that intersect contemporary design, craft, architecture, fine art, and cutting-edge technological research. The gallery promotes synthesis between leading creative thinkers and makers by creating opportunities to advance new connections within the global design community. Friedman Benda is committed to a critical view of design history. We aim to expand the design dialogue from its established sources, exploring perspectives that have previously been marginalized. Spanning five continents and four generations, Friedman Benda represents a roster of seminal established and emerging designers, as well as historically significant estates. With locations in New York and Los Angeles, the gallery’s exhibitions, publications and collaborations with institutions have played a vital role in the development of the contemporary design market and scholarship since 2007. For further information please visit www.friedmanbenda.com and the gallery’s Instagram @friedman_benda and YouTube channel.